Last week, Drew suggested someone compile a record book for fantasy football. Here's a start: I looked at NFL player stats since the AFL-NFL merger (1970) and came up with some retroactive awards.

No fantasy scoring system is more valid than any other, but I used the following, from Pro Football Reference's fantasy stats page: 1 point per 25 yards passing, 1 point per 10 yards rushing/receiving, 6 points per touchdown, and -2 points per interception. The raw stats are also based on PFR's numbers.

The Brady Award: Given to the quarterback with the highest point total. Named after Tom Brady for his record-breaking 2007 performance.

The Emmitt Smith Award: Given to the running back with the highest point totals. Named after Emmitt Smith, who won the award four years in a row.

The Rice Award: Given to the wide receiver with the highest point total. Named after Jerry Rice, who won the award eight times in 10 years.

The Christensen Award: Given to the tight end with the most points. Named after Todd Christensen, who won the award four years in a row.

The Tomlinson Award: Given to the player who has the highest value with respect to his position. The award is named after LaDanian Tomlinson for his 2007 2006 season. Value is measured in VBD, which stands for "Value Based Drafting." VBD takes the player's point total and subtracts the point total of the baseline starter at that position. PFR's VBD calculation uses the 12th best QBs and TEs, the 24th best RB, and the 30th best WR as the baseline starters. It also adjusts the totals for years with shorter schedules. While the exact value of VBD can vary depending on the baseline level, the important thing is that it allows us to compare across positions. It's the best stat for a basic MVP award.

The Beuerlein Award: Given to the player who provided the most value with respect to where fantasy owners drafted him. I used My Fantasy League's average draft position (ADP) records, which date back to 1999, to estimate the draft spot, and VBD to estimate value. The award is named after Steve Beuerlein, the first winner.

The Goodell Award: Given to the player who was the biggest bust by the same logic as that of the Beuerlein Award. Named after Roger Goodell, for obvious reasons.

To get some context for the awards and point totals, here are some graphs that show how fantasy point totals have changed over time. 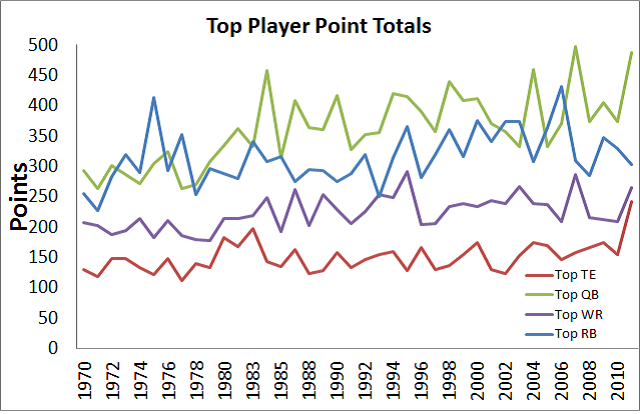 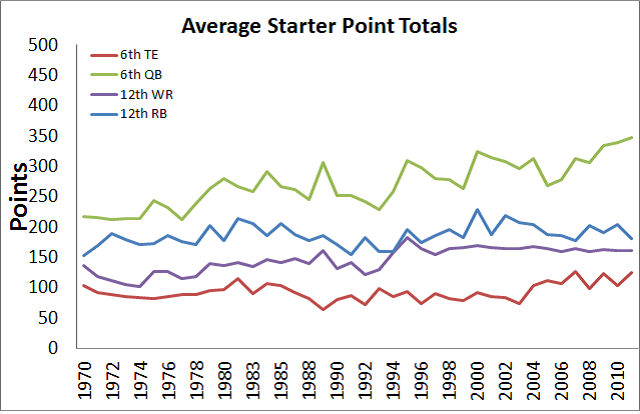 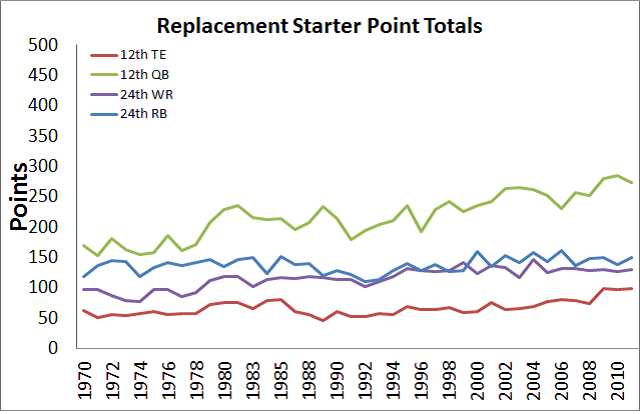 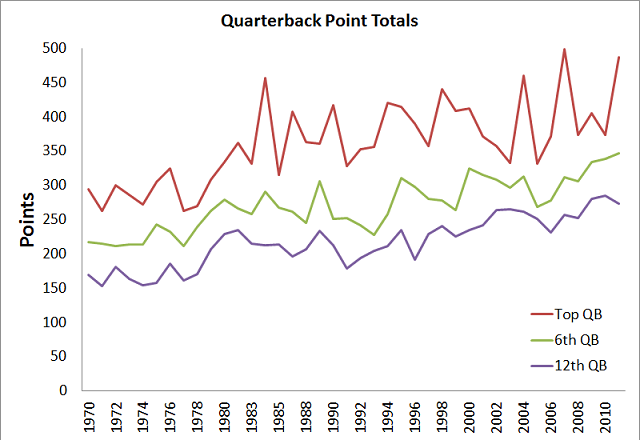 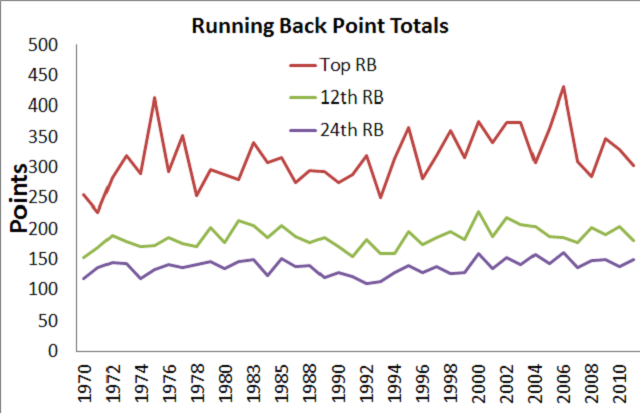 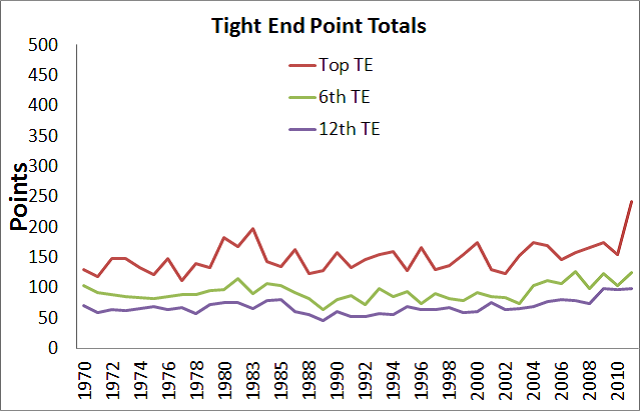 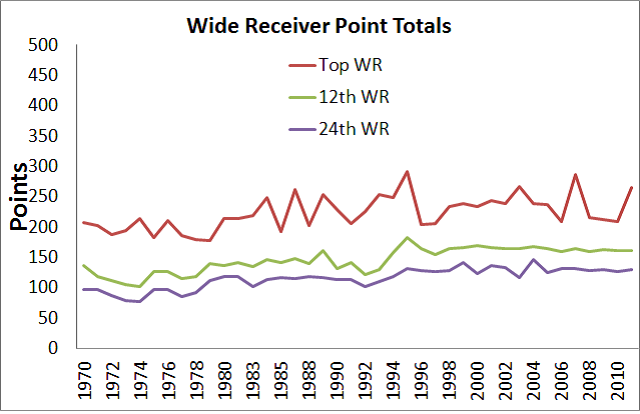 That 12th overall wide receiver line is nearly flat over the last decade: For all of the unpredictability and variance of individual players, the patterns remain the same.

Here are some more hypothetical awards for which data exist but I don't have easy access:

The Eckstein Award: Given to the player on the greatest number of rosters of teams that win their fantasy championship. Because each league is independent, being on a bunch of winning teams in fantasy football is more indicative of value than being on a winning team in real football. Named after David Eckstein, a baseball player whose presence on championship teams was used as evidence of his value.

The Cannon Award: Given to the player with the best single-game point total on the season. Named after Billy Cannon.

The Vick Award: Given to the player with the best single-game point total in a Monday Night Football game. Named after Michael Vick.

The Kicker Award: Given to the highest-scoring kicker. Named after Kicker.

The Flatline Award: Given to the player who has the least week-to-week variance in point totals.

The Variance Award: Given to the player who has the highest week-to-week variance.

The Horseshit Award: Given to the play whose outcome changed the result of the greatest number of fantasy matchups.

The Hall of Fame: A lifetime fantasy achievement award. Chase Stuart at Football Perspective added up career totals for NFL players since 1950. Jerry Rice was the best by a long shot.

Any other ideas? Let me know in the discussion.

We Rank the Best No. 1 NFL Draft Pick Quarterbacks of All Time

When Jason Whitlock opens his gaping maw, the abyss stares back at you

Jezebel
Ellen DeGeneres Staffers Supposedly Think Her Comeback Monologue Sucked
Joan Summers
Yesterday 1:15PM
Jezebel
Cardi B Is Facing a Defamation Lawsuit for Getting Into It With 'Racist MAGA Supporters' On the Beach
Megan Reynolds
Yesterday 10:35AM
Kotaku
Among Us 2 Cancelled One Month After It Was Announced
Luke Plunkett
Today 7:30PM
G/O Media may get a commission
Apple Watch Series 6 (40mm)
Apple Watch Series 6 Is Already $15 Off
G/O Media may get a commission
For the Next 2 Days, Take up to 80% off in Wayfair's Huge Way Day Sale
Wayfair Basics 1800 Series Sheet Set
More from G/O Media
Read on
Nintendo Takes Down XXX Peach Game Years After Release
Read on
You Can Get A Brand-New BMW X5 With A 6.2-Liter GM V8 Engine In Vietnam
Read on
Tony Stark Was Right About Something for Once
Read on
This Clip Of A Tesla Model 3 Failing An Automatic Emergency Brake Test Is Hilarious